Hello everyone and welcome on my Blog,

For the purpose of this study I've ordered from LeeValley and R. Hock irons to fit a Record no.5.  Those blades are O-1, A-2 and PM-V11 for LV and an A-2 from Hock.  I'm adding a Stanley iron that I already have.

Important note:  This study has been done by a human being and it means that the sharpening will not be 100% consistent.  Also, the wood being of changing nature, this will also affect the results.  A small chip sticking to the sole when the final test is done can dramatically change those same results.  What will be important is the general direction.

The goal of this study is to find a proper clearance angle for various irons and various wood species.  The proper angle combined with the proper steel should give a very resilient edge that will last a long time.

Using a Record no.5 with a 45 degree bedded iron, a clearance angle (CA) of 17° (sharpening angle (SA) of 28°) is quite a bit superior to any other angle.  As the SA is increased the number of shavings is linearly reduced.

I've tried to find literature on the subject and I didn't find anything.  A woodworker friend found this 1959 french study on very hard wood.  They conclude that a higher SA is required because of edge failure.
http://bft.cirad.fr/cd/BFT_064_35-40.pdf

This study will focus on soft, medium hard and hard wood but not the very hard exotic wood.

One of the problems was to find a proper method to assess the wear of the iron.  The level of wearness had to be the same for each test otherwise the results could not be compared.  It has been demonstrated in a previous study by Kees van der Heiden in 2014 that a sharp edge pull the iron into the work piece and, as the edge gets dull, the iron will be pushed away.

Another interesting study by professor Kato and Kawaii demonstrated the same thing.  That study was brought back to life by William Tindall, Steve Elliott, and Frederick Horne on this website.

For this study we will dull the edge by normal planing up until the plane, under it's own weight, can no more engage a full shaving.  To assess this, the plane will be pushed by the back of the sole without adding any other weight - vertical force. 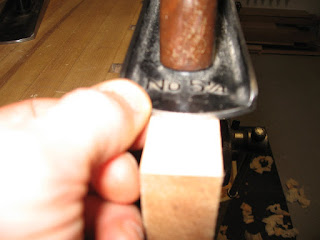 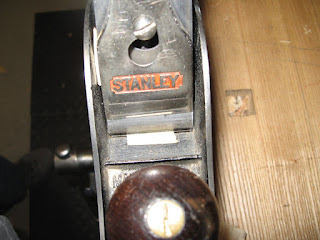 The test is completed when the shaving is not full width 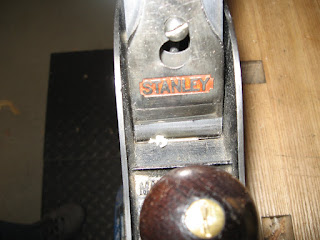 Using a method like the one above means that all blades will be in the same condition when the test is stopped.  At that exact moment, there will be an equilibrium of forces, that is, the vertical forces (weight of the plane vs wood compression required to engage a cut) will always be the same.

The hypothesis is that the degree of wear is proportional to the maximum number of shavings that the iron can achieve in normal use.

On the website of William Tindall, Steve Elliott, and Frederick Horne, looking at the last graph for straight or raising grain direction, it can be seen that the vertical force increase almost linearly with the length planed.  This is the result (at least partially) of a "flat" being formed under the edge as the iron wears out.

It is that "flat" combined with the edge rounding that keeps the blade from engaging in the wood.  As that flat surface increase in size, more and more vertical force is required to engage the blade for a shaving.

To resume, a plane/blade is used for a lenght - a number of shavings - with a normal planing technique, then a trial is performed without applying any other vertical force outside of the plane own weight.  The plane, pushed by the back of the sole, has to engage a cut.  If the trial is successfull then another five normal shavings are done and the trial is performed again.  The procedure is stopped when the plane cannot engage a full width shaving.

In details:
- A test is the result of two consecutive attempt with the same plane, same blade sharpening angle and the same piece of wood.  The results shown below are the average of those two tests.
- All tests have been done with the same Record no.5 plane.
- All planing is done as usual - normal planing used everyday.
- All tests are completed when the plane, under his own weight, cannot engage a full width shaving.
- For a given iron and wood species, all the results from 20° to 8° of clearance angle are done on the same piece of wood.
- All sharpening will be done with a guide using oil stones.  No stropping to be used.  An exception will be PM-V11 to be discuss below.
- The kind of wood to be used are Douglas Fir, Cherry and Maple.
- A 1" thick board will be plane on it's edge for 26" long and 0.002" thick shavings.
- After 10 shavings the depth of cut will be checked again and adjust if necessary.

For PM-V11 the procedure had to be changed because the results had very large differences.  It seems that either the stones were not enough aggressives or that I wasn't patient enough...  Stropping had to be used for this blade.  When looking at the results, this different sharpening technique will have to be account for.

Usually I sharpen free hand - without a guide - and I do not have any problem with the PM-V11 blades.  I think that this hand method helps in applying more pressure.

The sole of the plane has been flatten twice during those tests.  There was a doubt that the wear - because all the shaving were taken in the middle of the sole - was causing a problem.  Roughly 16,000 shavings were done for this study.

The wood used had flat or raising grain.  The following results can not be used for end grain planing where impact is fairly important especially on a shooting board.  Another study would be required for end grain.

For the study as a whole, all wood species and all types of blades, we get a very informative graph. 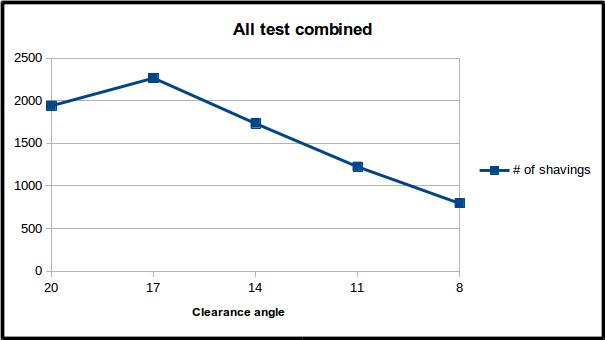 Please note that each clearance angle (CA) has been tested the same number of times but more test were done of Douglas Fir and Cherry then Maple. 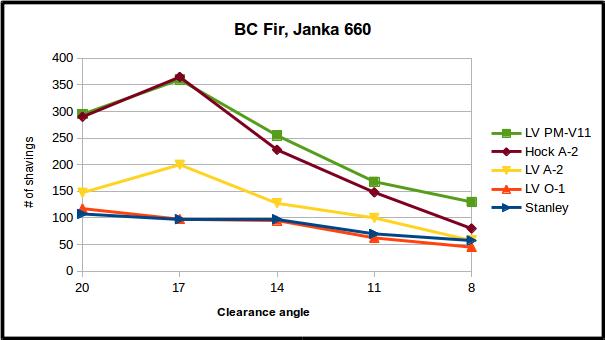 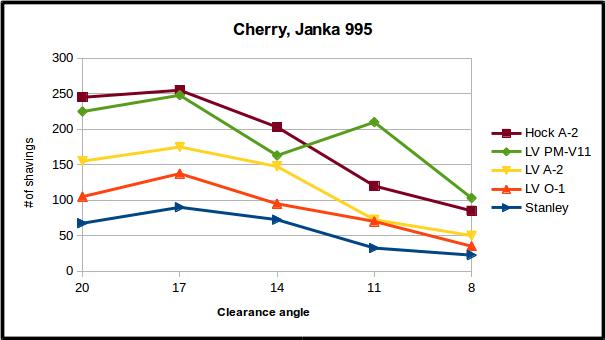 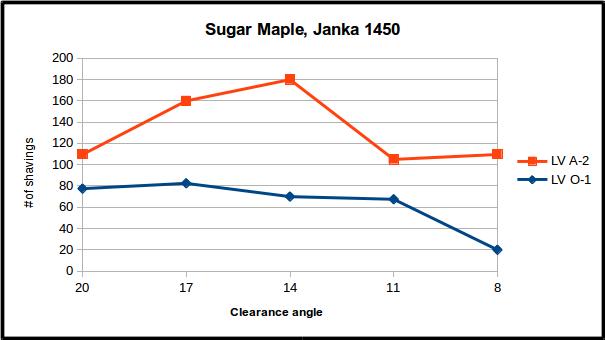 Only two type of blades have been tested for sugar maple.


Another interesting graph is to compare the number of shavings for the three wood species using the same blade. 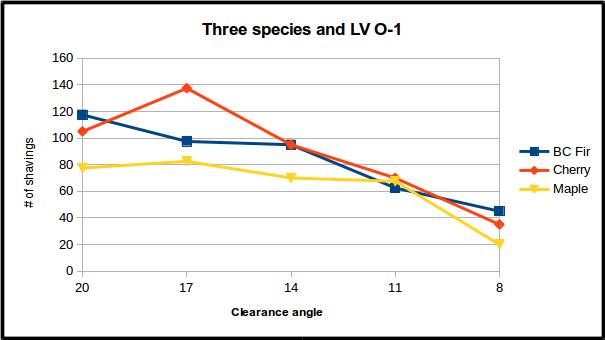 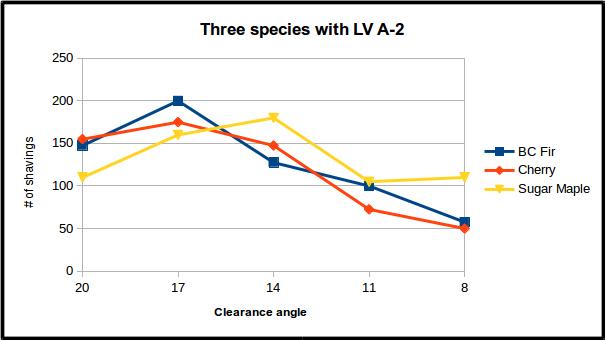 The Stanley blade used for those tests is an unknown.  They manufactured many types of blades over a long period of time.  The one used for the test seems to be relatively recent.


A) Surprises
.1 It was expected that a Stanley blade would underperform all the other ones.  LV O-1 is on par with Stanley.

.2 The large CA required will be a surprise for most readers but, after the previous study on edge retention, where bevel-up planes were supposed to be included but their low number of shavings could not be explained, it was not a real surprise for me.

My sharpening technique is free hand and the CA that I get is anywhere between 10-15°.  I will have to adjust it seems.

.3 It's very interesting to have similar result with Hock A-2 and LV PM-V11 blades.  Hock blades were much easier to sharpen than PM-V11 blades.  Is the problem discussed above regarding PM blade sharpening the culprit?  I just don't know.  To find an answer, another test have to be performed using another media for sharpening.

If we compare A-2 with A-2 then Hock blades easily outperformed LV blades.  In the first study, similar results were obtained when comparing LV A-2 and LN A-2.  It seems that cryogenic treatment is pretty effective.


B) Type of wood used
The types of wood used for this study are very popular for people working with hand tools.  Some people work exclusively with very soft or very hard wood but generally speaking you can find a whole lot of woodworkers using intermediate hardness like cherry and walnut and quite a few using very soft pine and fir.

The results for sugar maple are marginally better at a CA of 14° then 17°.  Another study for harder wood would be interesting.  Maybe, for really hard wood, a smaller CA is required.


C) Implication for bevel-up (BU) planes
An important answer was obtained by combining these results with the ones obtained in the previous study.  As mentioned in .2 above, BU planes blades were wearing out much faster than expected and it was assumed that something was going wrong with the plane.

BU fans (I'm included here) will have to take these results into account.


D) Primary bevel angle
For these test, all the blades had to be grinded because the first trial was at a CA of 20° (or 25° final sharpening bevel).

Assuming a 45 degree bedded plane iron, if someone is to have a CA of 17°, as this study suggest, then a primary bevel of 25° would be recommended.  This 25° with one or two micro-bevel will achieve around 28° at the cutting edge leaving a CA of 17°.  It is believed that LeeValley should have their blade ground at 25° instead of 30°.


E) Should your sharpening technique be modified?
Any method of sharpening that let you do your woodworking is a good method.  My personal hand free method is not giving me enough CA but, after all those years, I was able to sharpen and do whatever I wanted to with my planes or chisels.

The two studies give you a good basis on edge retention.  It's very easy to see that a proper steel combined with a proper angle will easily outlast an O-1 blade with the wrong angle.  Without buying new blades ones can improve substantially when using an adequate CA of approximately 17°.  I will also have to change my own method to get closer to 17°.


Please don't forget that this study was done by a human being using wood with constantly changing fibers.